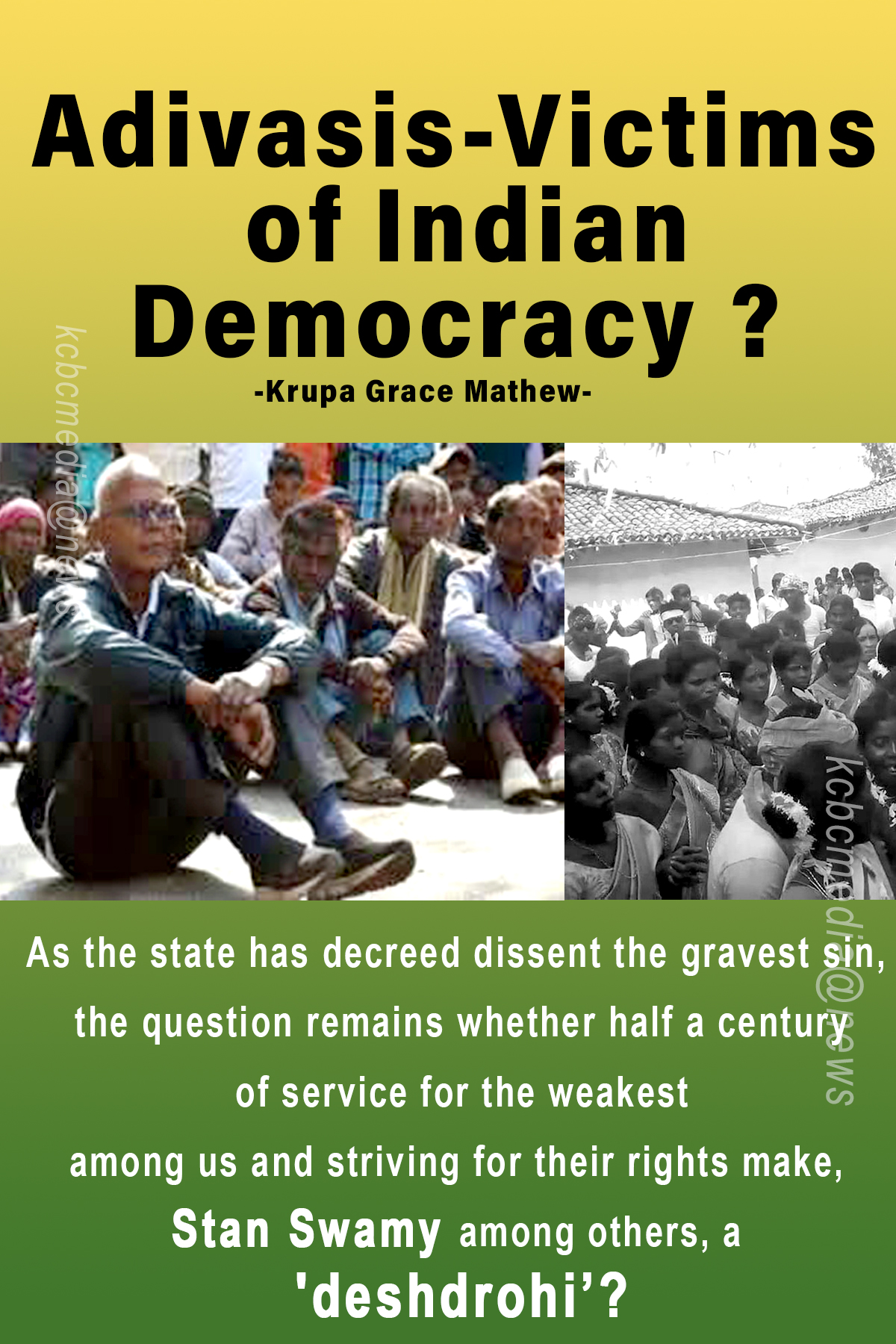 In October 2019, Soni Sori, the renowned tribal activist, was arrested hours before she was set to address a meeting to release illegally detained Adivasis.  In an intriguing turn of events, another tribal activist Stan Swamy, who had painstakingly worked for Adivasis's amelioration, has been arrested this October. As the country fell witness to a new wave of protests, the evidence of the world’s largest democracy’s latest campaign to stifle dissent has never been more profound.

From placing unwarranted animadversion on reputed international NGOs like Greenpeace and Nobel Prize-winning Amnesty International and trying to stifle the voices of individuals like Suman Sahai, Vandana Shiva, Aruna Rodrigues, Prashant Bhushan, Udayakumar, Admiral Ramdos, and Praful Bidwai, the authorities have now meandered to activists who work for the progress of the frail.

The plight of the Adivasis, the true inhabitants of the land, goes back centuries. Seven decades of democracy has failed to furnish them with sufficient resources to enhance their prospects. They have been displaced from their customary lands through a series of preposterous Forest laws and policies that overlook their rights. Though the 2006 Forest Rights Act legally secured their rights over their lands, the local government's failure to implement them pushes them into the risk of eviction from their lands.

The 5th schedule of the constitution mandates that a tribal advisory council (TAC) constituting solely of tribal members will advise the state's governor on everything concerning the protection, well-being, and development of the tribal population. It also empowers the governor to make laws or repeal laws favoring the welfare of the Adivasis. The decadence of the governance is evident from the failure of governors of any state to exercise this discretionary power in all seven decades since the inception of democracy in India. The TAC has been reduced to a pawn of the ruling party, constrained within its clutches, the symbol of their abandonment by the pillars of democracy.

Additionally, the PROVISIONS OF THE PANCHAYATS (EXTENSION TO THE SCHEDULED AREAS) ACT, 1996 (PESA) extends the right to self-govern to tribal hamlets and villages along with allowing them the liberty to manage their resources in accordance with their traditional management practices. However, in reality, their existence is only an illusion to the Adivasis as they are often diluted or impaired.

As a minority group report points out, ‘Adivasis have been denied land ownership rights over the last century, and their displacement from their land has made them reach a stage where they are fighting to retain their economic and social identity,' the Land Acquisition Act enacted by the central government in 2013 further dilutes Adivasis rights over their customary lands and allows for easy acquisition of them by capitalists. The act mitigates the need for social impact assessment preceding the acquisition of land.

The amendment of the Land Acquisition Act and the introduction of two additional ordinances by the central government in 2016 had significantly compressed the Adivasis rights. This culminated in the revamping of the Pathalgadi movement in Jharkhand. This, however, invited severe reproval by the government, which left nearly 10% of the population booked in blocks such as Khunti, Arki, and Murhu, after which the movement soon lost its vigor.

In a recent turn of events, the Apex court's February 2019 ruling led to more than a million Adivasi's endangerment towards eviction from their lands. The verdict spurred a new series of protests seeking rights. The subsequent brutal government suppression led to numerous innocent Adivasis being imprisoned under false allegations under the Unlawful Activities (Prevention) Act. These repressive measures were taken sans a court sanction indicating the bigotry of the authorities.

Thus in the long course of history, they have been made scapegoats of development. India had progressed at their expense, deserting them to poverty and deprivement, denying them even the prospect of development. Stan Swamy had consistently questioned all political groups' failure to ease their plight and ensure their rights in the Constitution, the implementation of PESA, and TAC. Still, he, like many of his contemporaries, now languishes in jail.

The affirmative action policies, including reservations and help, often do not extend beyond the public sector's scope. Their social exclusion, coupled with social prejudices against them, have hampered their advancement. Since few can finish schooling, the reserved positions in civil services or higher education institutions turn ineffective. They require a more systematic and structured effort at the grass-root level. Though constitutional safeguards provide them legal rights, they often do not extend beyond the paper's folds.

As the state has decreed dissent the gravest sin, the question remains whether half a century of service for the weakest among us and striving for their rights make, Stan Swamy among others, a 'deshdrohi’?